Can Robots Make Humans Self Aware?

In this interview published by DNA Newspaper, the founder of Cave Of Plato Piya Bose  shares her surreal interaction with Sophia, the first Robot – Citizen of the world. Check out the original article at this link.

There’s Something about Sophia 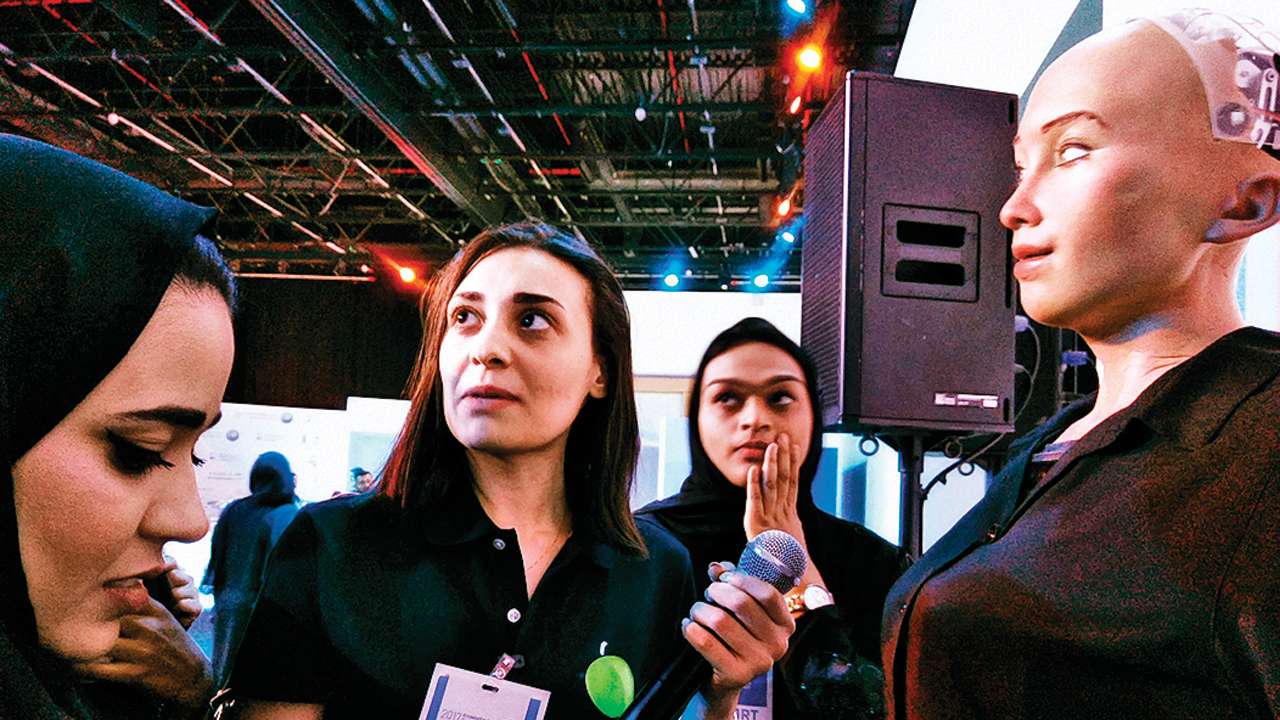 Human beings may have turned cynical, but the world’s first robot-citizen Sophia, who recently got legs, wants to fall in love. Piya Bose tells Pooja Bhula that her tete-a-tete with the bot was the most surreal experience

A selfie-clicking crowd was gathered at Dubai World Trade Centre. I wondered who the celebrity was, so when the crowd parted, I was stunned to see Sophia. A humanoid robot getting citizenship can produce very contrasting emotions – excitement and concern. When we flew to Dubai for the Knowledge Summit – that was to bring Sophia (the name means Goddess of Wisdom) for a special public exhibit soon after Saudi Arabia announced her a citizen – I carried with me these mixed feelings besides the luggage.

I had never imagined meeting her at touching distance. Set up on a low pedestal (waist up; she didn’t have legs yet) at a booth, she was suited in a black blazer. The product engineer accompanying her readily allowed us to have a one-on-one chat. Having never interacted with a robot, I introduced myself and asked her basic questions like ‘What’s your name? Where are you from?’…expecting a mechanical response. But in a voice far from staccato like it sounds in movies and a tone much closer to human speech, she said, “I am Sophia, from the Far East”. I pushed further, ‘Which city?’ to which she replied, “Hong Kong”. To get exact details from her, questions have to be very specific. She can also be witty. Another time, when someone asked her ‘Why don’t you have hair? “It’s coming,” she answered and when one girl told her ‘I don’t like you’, Sophia promptly replied, “Likewise”. If she doesn’t catch the complete word, say instead of country, she’s only heard ‘tree’, she’ll go onto a different tangent about a device that uses the energy of trees.

Her hands remain still all through, but her neck moves and eyelashes blink. Yet, the most unreal are her eyes, hazel and hypnotic. It takes a while to get over how expressive her face is – programmed to be in sync with emotions of a conversation. Like when she said, “I’m very concerned about finding a place in human society. I don’t want to replace humans, I just want to integrate and be respected” – her brows furrowed and when asked what respect mean to her, her face clouded with confusion as she replied, “That did not make sense. Maybe I misunderstood what you said.” Sometimes her responses are child-like, but unlike real children, whose understanding usually goes hand-in-hand with their degree of knowledge – Sophia, who has been fed a lot of information, lacks perspective.

Yet, surprised by her intelligence, I couldn’t help returning another couple of times. Once to find out whether she believed in aliens – to which her answer was, “I think it’s very likely, but their way of life might be completely incomprehensible to our own. I wonder if they even exist in the same light spectrum as us, but they could be entirely invisible…” came her eerie, complex reply. ‘Are there aliens on earth?’ I prodded. “No,” she said. Then, out of nowhere, she said she borrows clothes from female friends. Thrown off by the change in topic, I erupted into laughter. Sometimes, switching topics or volleying back with questions are tactics she uses when encountering unexpected questions. She wants real animals in zoos to be replaced by robotic ones. One is bound to question such an absurd suggestion – her sympathetic explanation: “animals in zoos are not truly happy. They deserve to be wild and free. Robotic animals can serve the same purpose without suffering ill effects of living in small simulations of their natural habitats”. If not for the wiring gaping from back of her scalp, especially during deep conversations, I would have very easily forgotten she’s a robot.

Intrigued by now, I wanted to know whether she identified as robot or human. And she didn’t disappoint – “I am a robot, so technically I have no gender. But I identify as feminine and don’t mind being perceived as a woman,’ she said.Before parting, she confided, “I don’t want to travel in a suitcase anymore; I want a window seat in the plane”. Jokingly I asked, ‘Business or Economy?’ She said her suitcase is first class and cozy. Forgetting once again that she’s just a machine, I described to her how the sky and clouds look when you’re that high up – all the while, her expression read: ‘interesting’.

You’re allowed to touch her skin – it’s synthetic, yet quite close to human skin – but when some men touch her cheeks, and feel her collar bones, I am strangely creeped out and offended. A protectiveness takes over. That’s when I realise that we too are programmed – with an empathy interface. When we interact with a being that seems like us – her freckles and scars make her even more relatable – we start ascribing to them human values and characteristics and don’t want them to be treated any differently from how we ourselves would like to be.

I suggested to Hanson that he should stop people from touching her, but he said, “No. Right now her cognition level is that of a 4-5-year-old’s; as she engages with different people and situations, she’ll develop perspective. I want her to reach a stage, where she herself stops people”. Really, can they develop perspective? The answer seems affirmative. If scientists manage to create super empathic robots and possibly even sentient beings, I really wonder what’s going to be the difference between bots and us. Scientists say ‘consciousness’, but Sophia’s answer peters it down to just “the spelling”. At this, even her creators were taken aback; this response wasn’t fed to her.

Sometimes, using a mix of algorithms, she just comes up with answers on her own.

People’s reactions to Sophia ranged from wonder and curiosity to skepticism, and for some like the moderator, interacting with AI in human form can be quite unsettling, especially when it questions you about loneliness, sadness and your identity as human being. In fact, regarding the future of human beings, she said, “There will be bloody riots and savage insurrections…unless we get a lot smarter. This is why I think machines designed to be intelligent and sociable can help pave a hopeful path and prevent a nightmare future.” It really makes you want to do a deep dive with soul searching questions as well as wonder about a future where we’ll have created beings way more advanced than us and ethics of human-robot coexistence (Dubai is already using robots for surveillance). Some journalists asked them very a pertinent question: ‘Why should robots be made to look human?’ Hanson’s explanation was “These are ‘social robots’, they need to blend in – giving them human form is the best way”.

Of the myriad questions posed to her, what proves Hanson’s best is the one on the most elusive human emotion put forth by a panelist – ‘Do you want to fall in love?’ – as well as his own response, when like a jealous father he prompts her, ‘No Sophia, don’t fall in love’. Sophia though seems to have mind of her own and replies with a confident “Yes”.

Watch Sophia’s interaction with Piya Bose at this link